The Town Council has created a wildflower meadow on the site adjacent the Dutch ford at Tewkes Creek. The meadow will enhance this wildlife haven and encourage bees, butterflies and other insect and wildlife to Tewkes Creek.

The project was started in the Autumn 2013 when the ground was prepared and wildflower seeds sown  and is now becoming an established meadow.

In commemoration of the hundredth anniversary of the First World War in 2014, the Town Council also sown Flanders Poppy seeds through the meadow.

The trees are planted bordering the wildflower meadow. A service of dedication was held on Sunday 11th November, at 4pm. The Town Council invited dignitaries, members of contributing organisations and local residents to join in the short service which was led by the Rev Canon David Tudor. The Town Council was pleased to be able to deliver this project which was first suggested by a local resident after seeing a similar project delivered in Belgium. 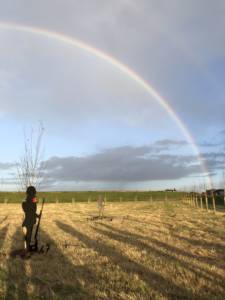